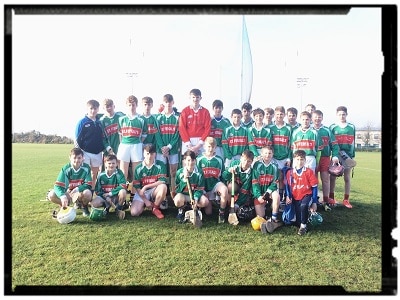 St. Fergal’s kicked off the Leinster u-14 championship with a hard fought victory over Portlaoise C.B.S on the 2nd of March.

Portlaoise started the better with some early scores from long range, Sean Fitzpatrick kept St. Fergal’s in touch with some good frees, which were won by Ben Doran, Adam Ryan and Andrew Dowling. Scores were hard to come by in the 1st half for both sides. Portlaoise finished the half stronger with a good goal from play. Fergal’s needed to up their proformance in the 2nd half, and they did exactly that. Fantastic work throughout the entire game by wing back Philip Tynan ensured the movement of the Portlaoise forwards was halted. Darragh Hogan was as solid as ever at centre back and led by example throughout. Ryan Costigan hit some super scores as well as delivering great ball to the inside line. All the hard work paid off when Dylan Carroll gathered a ball out the field, broke through the defence and fired an unstoppable shot to the corner of the net. The introduction of James Keegan at the break strengthened the midfield and his efforts were rewarded with a well taken goal as the game neared its end. The scoreline finished 2-8 to 2-5.