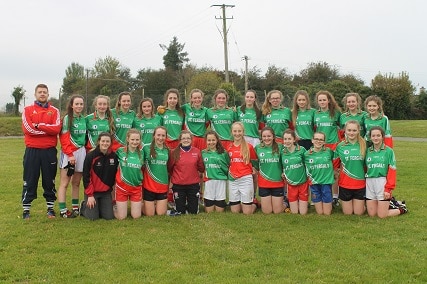 Our Junior Ladies Football team continued their winning ways with a thrilling one point victory over a high fancied Tullamore College side on Friday 21st October,
Tullamore were first to settle with three early points before Ellen Hennessy raised her first white flag of the day, further points from Clodagh Tynan, Leanne Hyland and Zoe Daly got St. Fergal’s right back into the encounter. Tullamore then pushed on with three 1st half goals, two well worked moves resulting in the green flag and the 3rd coming from a penalty. Tullamore could have had a further two goals in the final minutes of the 1st half only to be denied by two great saves from Niamh Bracken. Two more points from Ellen Hennessy left the half time 3-4 to 6 points in favour of Tullamore College.
The second half saw the girls show fantastic spirt to mount the comeback. Great work at the back saw Holly Bowe and Keira Corcoran cutting out the Tullamore attack, while Catherine Galbraith carried a lot out ball out of the defence. Clodagh Tynan and Shona Jones worked tirelessly up and down the field turning defence into attack, resulting in Ellen Hennessy hitting the back of the net and so the comeback was on. Tullamore were not going down without a fight and further scores saw them push into a commanding lead. Clodagh then struck three goals and a point in a spell which was saw huge work put in by Leanne Hyland, Alanna Tynan and Shona Jones. Tullamore held a two point advantage in the closing minutes of the game and now had every player behind the ball, but in a fantastic move the ball was worked through five different St. Fergal’s players before Gemma Hoare hammered home a strike which left which saw St. Fergal’s win by the slightest of margins on a score line of; St. Fergal’s 5-7 Tullamore College 5-6.
A game which saw a fantastic attitude shown by the girls to dig in and get the win. They now march on the final group game against Kilcormac knowing a win will put them into the knockout stages of the Leinster championship.
Team and Scorers: Niamh Bracken, Holly Bowe, Keira Corcoran, Catherine Galbraith, Niamh Saunders, Shona Jones, Clodagh Tynan (3-2), Leanne Hyland, Paige Hyland, Zoe Daly(0-1), Ellen Hennessy (1-4), Gemma Hoare (1-0), Chloe O’ Riordan, Chloe Carroll, Carys Davies, Caitlin Morris, Katie Groarke, Laura Neale, Chloe Guilfoyle, Alanna Tynan, Chloe Martin, Emily Carroll, Ava Meagher, Orla Heffernan