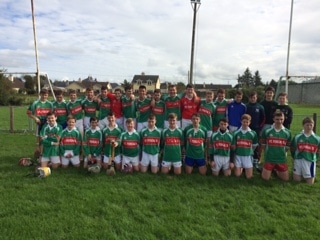 Our Junior Hurling team recorded a good win in their North Leinster Quarter  Final against a physically imposing Cistercian Roscrea team today. Better known for their exploits on the rugby pitches, Cistercian College have been making good progress in hurling in recent years. Played in perfect conditions for hurling, this match wasn’t decided until the last few minutes. St Fergal’s had the better of the opening half against a stiff breeze and led by 1-12 to 2-06 thanks to some lovely score-taking by Cillian Maher, Darren Bowe, Aaron and Ryan Costigan . However, Roscrea replied well in the second half. The physicality of their forwards began to pay dividends  with a goal and three points coming from  their huge centre forward. Going into the last five minutes just three points separated the sides, however the icing was put on the cake when a long range free from Thep Fitzpatrick went all the way to the net leaving St Fergal’s ahead at the final whistle on a score-line of 3-16 to 3-09. Boyne C.S. from Trim will provide the opposition in the semi-final on a date yet to be arranged.

A serious injury arising from an accidental collision in the last few minutes saw a Cistercian player leave the field in a very groggy state. An ambulance was called as a precautionary measure and he was taken to hospital with suspected concussion. We wish him a speedy recovery.