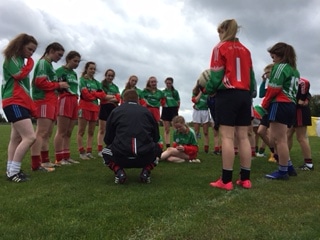 Monday, 3rd of October our junior ladies’ footballers got their Leinster campaign off to a winning start with comprehensive victory over Columba College, Killucan on a score line of 8-17 to 1-00.

The girls stormed into an early lead with points from Clodagh Tynan, Leanne Hyland and Shona Jones before Zoe Daly found the roof of the net with a super strike to raise her first green flag of the day. With the wind behind them the girls pushed on with further points from Ellen Hennessy and Emma Dunphy to leave the half time score at 3.14 to no score.

The second half was more the same from St Fergal’s with a hat trick of goals from Paige Hyland. Killucan tried and tried but were held up by Keira Corcoran, Denise Healy, Niamh Saunders and Catherine Galbraith.

Niamh Bracken’s kick-outs were the launch pad for many of St Fergal’s scores.

All twenty panel members played a key part in this victory, with eight girls getting on the scoresheet.

Up next is a game against a strong Tullamore College side which will provide a much tougher test. Good luck girls.