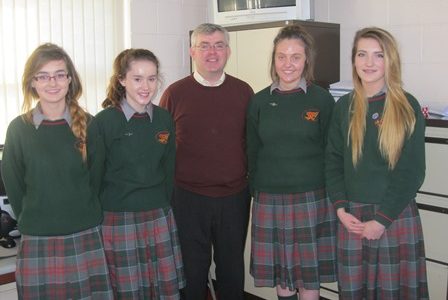 Kevin Langan (Laois County Enterprise Board) with a group of happy students after his talk during Enterprise Week. Lisa and Niamh at their stand during Enterprise week. This new competition, sponsored by Manor Stone, was launched during Enterprise Week by Mr Tom Hennessy of Manor Stone. “I’m a great believer in encouraging young people to come up with new ideas”, said Tom at the launch.” Wouldn’t it be terrific if one of these young people could come up with an idea that would lead to employment in this area down the road?”

Mrs Áine O’Neill, Principal thanked the Hennessy brothers of Manor Stone for their very generous sponsorship. The prize is divided into two categories, Junior for those in the Junior Cycle and a Senior for the older pupils. The closing date for entries was March 7th and the judging committee are hard at work sifting through the entries.