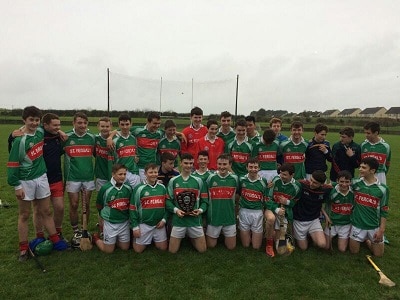 On a fresh Friday December 9th our Junior Hurling Team enhanced our school pride in securing a win the North Leinster C defeating Kilcormac on a score-line of 3 11 to 2 11. This was a well deserved and long awaited win for this group of players who were well beaten by the same opposition in the corresponding final at under 14 grade two years ago, and were pipped at the post last year by Killina. The game started at a hectic pace and before long St. Fergal’s found themselves facing an uphill battle having conceded two goals in quick succession against the run of play. By half time though a nine point deficit was reduced to four, thanks to some fine long range free-taking by Thep Fitzpatrick, an opportunist goal by Aaron Costigan and points by Evan Hawkes and Brandon Cleere.
The half time break gave the team an opportunity to re-focus and they started the second half in very determined fashion. An early goal was brilliantly finished by Darren Bowe following a mazy run and the pendulum began to swing in favour of St Fergal’s. Further points from Evan Hawkes and Aaron Costigan cancelled similar scores by Kilcormac and the game was in the melting pot. Substitute Ryan Costigan showed some fancy footwork when finishing to the net to put St Fergal’s a goal ahead. This proved to be a lead that wouldn’t be relinquished. In the final stages some frantic defending kept Kilcormac at bay and the final whistle saw scenes of great jubilation. The team showed great resilience and courage to hold out despite some robust exchanges and emerged well deserving winners at the end. Well done boys!