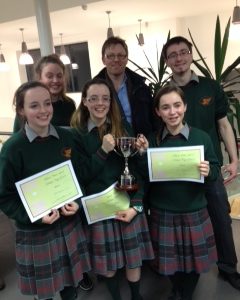 The Leinster Inter-Schools Debate competition concluded last Tuesday, 24 March, in Mountmellick Library. After two exciting rounds, the two teams remaining in the competition, St. Fergal’s College Rathdowney and Scoil Criost Ri, Portlaoise met in the final. The motion up for debate was “Ireland has lost the Pride and Passion of its Forefathers”. However, there was certainly no lack of passion or pride in the deliverance from both teams with St. Fergal’s proposing the motion and Scoil Criost Ri opposing.

Both teams gave the audience plenty of food for thought on the motion. Arguments made varied from how we are no longer the land of saint and scholars to the obvious pride and passion shown by the Irish team in the six nations. Both teams gave as good as they got, as rebuttals fired back and forth after each speaker finished delivering their specific angle on the topic.

In the end however, it was the St. Fergals team that managed to convince the adjudicators on the night that we, as a nation, have indeed lost our pride and passion. The St. Fergals team, Ciara Clooney (Captain), Aoife Keane, Emma Keane and Chloe Keane, with Robert Martin (substitute speaker), were well researched and rehearsed, and presented their argument with poise, passion and persuasiveness. This was a fantastic performance by a capable, confident team.