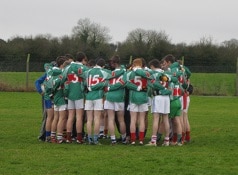 St Fergal’s College Junior Hurlers enjoyed a great win on Wednesday 23rd November in the North Leinster Semi-Final when they defeated Boyne C.S. from Trim, Co. Meath. The game was played in ideal weather conditions at Hawkfield, Newbridge – the Kildare GAA centre of excellence. St. Fergal’s got off to a blistering start with two goals in the opening five minutes from Conor Handcock and Gavin Delaney. Aaron Costigan added a couple of points from placed balls before Trim struck back with two goals of their own to rejoin the battle. Every score was keenly contested and then just before half time St. Fergal’s added another goal to leave them ahead by six points at half time.

In the second half Trim added an early goal to once again put pressure on. Further goals from Conor Handcock and Evan Hawkes and some lovely points by Thep Fitzpatrick and Aaron Costigan from frees, opened up a lead which was maintained until the end, despite a late goal from the never-say-die Trim forwards. The game finished on a score-line of 6-12 to 5-06.

St Fergal’s now await the winners of the other semi-final between Kilcormack and Rochfordbribge.